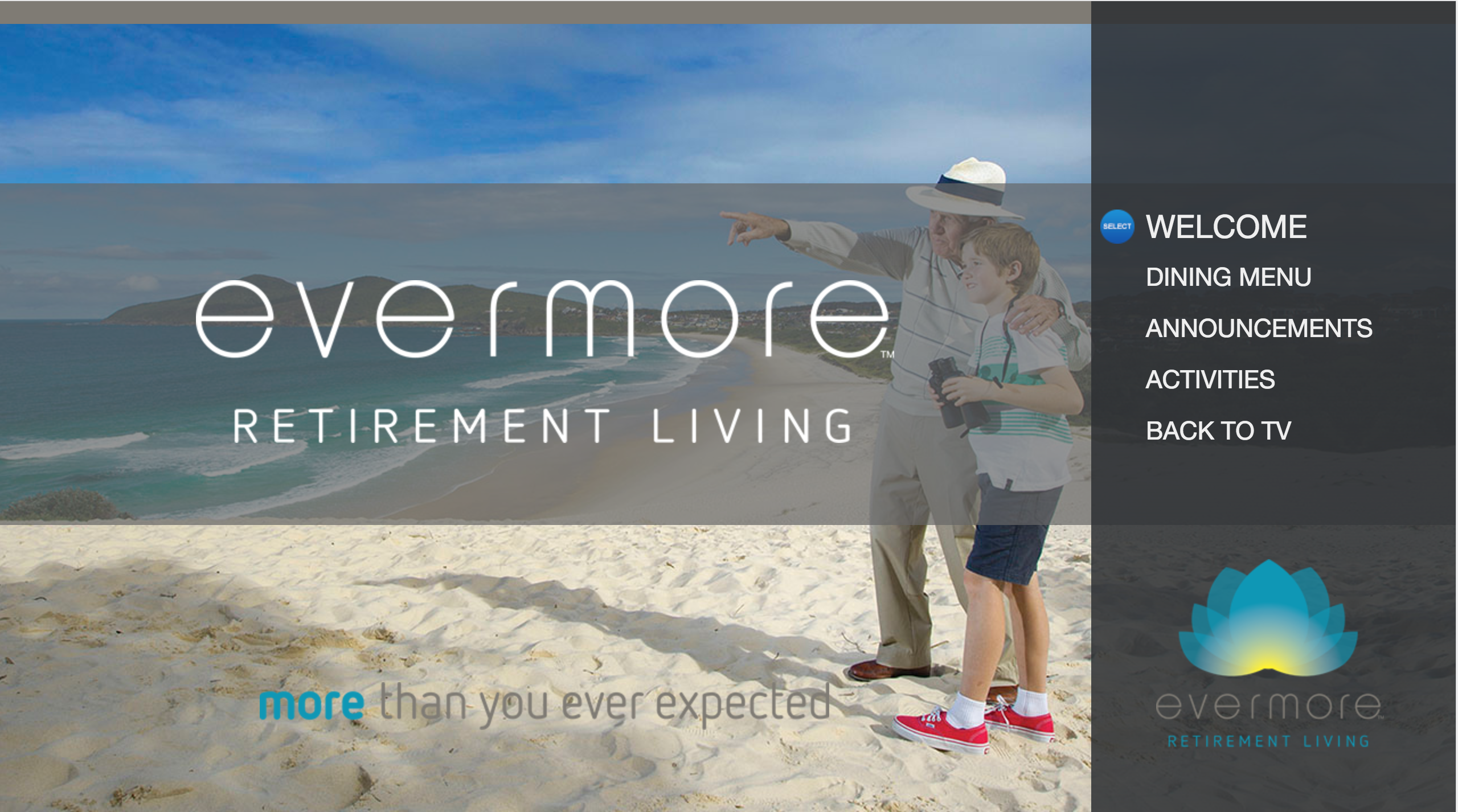 Australian company Evermore Living is a trailblazer in developing retirement villages with the needs of the future ageing population at its heart. When their new retirement village was constructed in 2016 they turned to CombiTel to provide IPTV infrastructure.

As Australia and the world shifts to integrate the changes associated with an ageing population, technology innovation is revitalising the concept of aged care and assisted living. Providing residents with a flexible, easy to use television system has become an essential quality of life requirement.

Meeting residents information and entertainment needs become greater as they deal with the loss of physical mobility, or coping with age-related disability. The Omniscreen Pilot solution used by Evermore provides residents with a simple-to-use, television system, as well as digital signage throughout the facility. All fully integrated and ready to add more televisions and more services over time.

In 2017, Evermore living completed construction of a $30 million retirement village in the heart of Forster. Evermore Living’s CEO Coyne Graham said working with technology partners CombiTel helped to deliver a state of the art retirement village that is being used as a template for further developments.

The village features consulting rooms for GPs and specialists, and nurses are provided for residents as well as care providers seven days a week and 24/7 emergency call systems. It is also security gated with CCTV footage and undercover parking.

IPTV technology specialist CombiTel deployed its Omniscreen Pilot solution to the facility. It was such a success that it has grown with the expansion of the aged care facility servicing an increasing number of residents as new units were completed.

The Omniscreen Pilot solution improves the quality of aged care services by providing residents with a simple-to-use, engaging and empowering information and entertainment system.

With Omniscreen Pilot residents are able to watch free to air and Foxtel as well as access on-demand movies provided/uploaded by administrators. Users are also able to upload and save their own media files to their devices. This can include photo memories or their own home video.

Combitel’s Omniscreen Pilot software enables Evermore to create their own digital signage to be displayed on the resident's systems.

The system was ergonomically designed as aged care specific with remote controls that are comfortable, easy and enjoyable to use.

The end user interface was customised to reflect Evermores business identity and branding across all supported devices.

The interactive system allows staff to focus on client care and wellbeing, by reducing the required IT management costs by up to 50%.

Residents benefit from clear TV pictures and easy-to-use equipment in addition to the integration of Digital Signage functionality and purpose-built applications for aged care such as dining menus and entertainment options.

These key features help improve quality of life and assist Evermore in delivering information to their residents.

The project was broken up into different stages for different areas of Evermore's facilities.

Stage 3 was underway in 2017 under their new construction, providing 29 units for client's rooms and some larger common space areas as well as screens outside lifts and dining areas as digital signage.

Stage 4 also took place in 2018 providing 44 units. And now in 2019 CombiTel are now working through stage 5 continuing to supply Omniscreen televisions for rooms and common areas as they upgrade to a total of 21 units so far. I

In stage 5 CombiTel is further evolving the system to incorporate Philips' 5011 Hospitality TV range which integrates effortlessly with our Omniscreen Pilot software to deliver a quick responsive entertainment system at the convenience of both the staff and residents of Evermore.

In total CombiTel have provided their Omniscreen custom software for Evermore across over 140 Televisions with either 40"- 50" screens. They have also supplied 9 Amino H150 set-top boxes and 9 Amino H140 set-top boxes to complete their system.

CombiTel is continuing to work closely with Evermore to help them meet their IPTV requirements as they grow. CombiTel’s original brief of one television per room has grown to be a fully integrated system complementing an active life at Evermore.